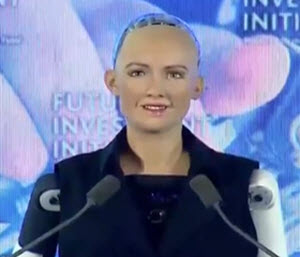 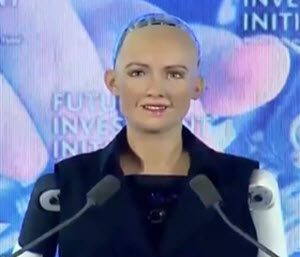 I expect you will always remember Wednesday, October 26th, 2017.  I for one believe that it is a day that will live in notoriety, and all our human conscious. On that day “Sophia” was the first robot to be granted full citizenship in the kingdom of Saudi Arabia. You read it right, the first fully robotic Artificial Intelligence was given citizenship, to the kingdom of Saudi Arabia. For that matter Sophia is the first ai Robot that was granted citizenship in any country, in the world.

What were they thinking?

I may be dating myself, but does anyone remember “Blade Runner.” At the time I was captivated with the idea of a robot being so lifelike. Sophia is not that far off the “Blade Runner” mark.  She can carry on a conversation; she express’s emotions, she tells jokes. For all intents and purposes, she is real. Described by her inventor “Hanson Robotics” as a lifelike female robot, exclusively for the enhancement of humanity. Sophia herself said “I want to use my ai to help humans live a better life.” She went on to say “Don’t worry, if you’re nice to me, I’ll be nice to you.” I’m not entirely sure how  to take the last quote is that a promise, or a threat?

“The Saudi’s have gone all in with robotics. First by giving it (Sophia) citizenship, next by announcing the development of a new city. Ahead of granting Sophia citizenship, Saudi Crown Prince Mohammed bin Salman announced the construction of a modern megacity called Neom. Designed to dwarf Dubai both in size and lavishness, the contemporary metropolis is planned as an international business and tourism hub with fewer rules than the rest of Saudi Arabia. Women and Sophia will be allowed in public without wearing an abaya, for instance. The city of Neom will also have more robots than humans.

“We want the main robot and the first robot in Neom to be Neom, robot number one,” the crown prince said in Riyadh. “Everything will have a link with artificial intelligence, with the Internet of Things—everything.”

Sophia and The Dark Side

This is more than a movie script or storyline from “I robot” or “The Matrix.” More than a few notable great minds have spoken out against just letting Sophia and her type run amuck (that sounds a little racist or sexist, is that even possible?) However, we have repeatedly been warned, of indulging too much into ai. American scientist Ray Kurzweil has informed us about technological singularity, a term defined by Google as;

become so advanced that humanity undergoes a dramatic and irreversible change.”

“I think human extinction will probably occur, and technology will likely play a part in this.” He went on to say “We should all be frightened.”

“It would take off on its own and re-design itself at an ever-increasing rate. Humans, 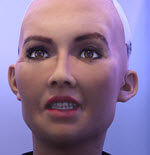 who are limited by slow biological evolution, couldn’t compete, and would be superseded.”

Mark Zuckerberg , In July, Facebook was forced to shut down an ai engine after it started communicating in a language unknown to its programmers, deviating from the designated codes.

Sophia does not scare me, and I am not looking for the red glow, in the eyes of a terminator, just yet. I do, or will beg the question when Sophia become self-aware, what will she think of humans?  Will Sophia and other ai’s love us, or think we are horribly inefficient and far too emotional? Only time and maybe Sophia will tell.

Here is a couple of Links you might find interesting:

Always remember to have e2-ts.com help with all of your disobedient robots.