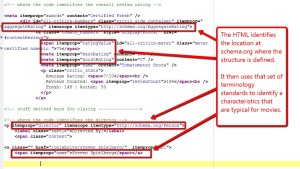 The XML Schema is just one of many XML schema languages in use today.  For this reason the more common, and less confusing, term for this is simply XSD for (XML Schema Definition).  It goes without saying that the XML schema languages have a level of complexity that we needn’t get involved with here.  Suffice it to say though, there are some things we can learn from these technologies and the XSD in particular as it relates to search engine optimization.

For our purposes, XML schema languages for SEO can be very valuable.  While this is not a new technology, its usage is merely becoming more widespread as SEO technologies (and technologists) evolve.  At its core is the ability to give nearly everything on a webpage a more clear definition.  As it stands now, Google and the other large search engines scour the web for the content on all of our websites.  Their main limitation is they are limited to text.  Images, flash, videos, etc. are all but blank space from the perspective of the “bots”.  The software programs utilized to read a web page.

What schema components and declarations give us the power to do, is give all parts of a page, even text, more meaning to the search engines.  This makes perfect sense when it comes to items that the bots can’t “read”.  An image can be given a title tag, and some other standard attributes which not only help impaired web users (by identifying the image or video), but also by providing some information about the image to the “bots”.  A title tag of “Heber City Utah bed and breakfast” could tell the bot about that image as well as provide some valuable SEO “points”.

You would think that a page’s text would be self-explanatory, but the XSD technology allows us to take it one step further.  In the example above, we use the words “Heber City”.  For humans, that is clearly the name of a city.  If humans were responsible for ranking a webpage based on content, we would assign value to that phrase “Heber City” because it provides geographic context.  For a bot, the phrase might have some value, if the bot was familiar with the phrase, but we now have the ability to define that phrase further.

By adding some simple code around the chosen phrase, in this case “Heber City”, we identify that phrase as a “city” and therefore give it extra meaning to the search engines.  This technique can now be used to identify phone numbers, email addresses, websites, business names, logos, addresses, hours of business, movie titles, actors, etc.  The list is quite exhaustive.

The obvious benefit of schema for Search Engine Optimization is our ability to “educate” or “help” the bots in identifying and categorizing our pages and the text therein increases exponentially.  Seemingly useless phrases and text can now carry meaning and provide the bots (and therefore the search engines) with additional data with which to classify our pages and sites.  The benefit of XSD for SEO now goes well beyond the benefit of targeting previously un “SEO-able” items on a page, to benefiting the entire page. We all should pay attention to the schema data on out sites.