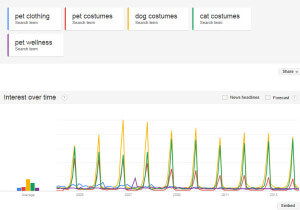 SEO tools are everywhere. Google happens to be the go to source for SEO tools and help. I know everyone freaked out when Google changed their analytics program. However, you can still get the some information from them. We just have to work a little harder to get it. Google always does the right thing. More specifically they do the right thing for Google. Which is exactly what they did? They made it easier for you to run a pay per click campaigned, and harder to use them for a keyword suggestion tool. I want to share an experience I have had recently with a client.

Historically I had always used SEO tools like Google Analytics as a source to find valuable keywords and meta-terms that produced the right volume of searches and seem appropriate for the optimization.

The client I want to mention I first meet in May or June. His chosen profession is in the non-pharmaceutical dug industry. He sells cream ointment, sunscreen and alike to retail stores. Many are large name brands that we would all recognize if I mentioned them. He does quite well. However, he has a friend that started an online business a few years ago selling nothing but baby clothes, and is worth several million dollars today from his online baby clothing store.

My client travels the world buying in bulk and dealing with a wide variety of manufactures. During his other business trip he has developed relationships with a few clothing manufactures. Now you see if you put two and two together, my client wanted to start online t-shirt shop. The unique aspect would have been the ability to inkjet or heat transfer anything that anyone wanted shirt for their pets, and ship the same day. You know cute sayings like “Mama’s a bitch” etc. Not at all a bad idea

As I had mentioned we first met in May or June. By July we had a contract and began the preliminary process of building an online store. By late August or early September my client brought on a partner to help manage the day to day decision making. Needless to say they were old friends. However, the partner had never worked in retail, with the internet or in any tech or marketing field. This is where things to a turn and started to creep in the wrong direction.

The idea suddenly became far more pet centric. With collars, food, treats, and of course costumes and uniforms, dress up stuff for animals.  By now t is early October, they do not have any suppliers but would hate to miss out on the upcoming Halloween costume season. I carefully explained we should look at the Christmas season, but they were insistent that they could make money and sell Halloween costumes. They quickly established a relationship with a 3rd party supplier and we posted Halloween costumes on their site. I think it went fully operational about 2 weeks before Halloween.

Sales we slow, but the money man didn’t care. All he wanted was a baseline to compare the next year with. He hof course they wanted to turn their attention to Thanksgiving, although I protested a little, and insisted that we look to the Christmas season we did began to post both seasonal costumes for pets.

This is where proper use of SEO tools would raise it head. At the beginning of this blog I mentioned that there are all kinds of SEO tools that can help us. Google provides many of them including Webmaster Tools, Analytics, AdWords, and more. The one I would like to mention is Google Trends.

I believe this is a highly underutilized tool. The numbers and time line it displays are somewhat esoteric and so many webmaster do not use it. However, if you look at the attached graph you can clearly see that pet clothing and costumes sell only in September and October; by December they became flat and stay that way the rest of the year. Food and treats although the numbers are smaller remain consistent all year long.

I’m sure I’m not the only one that sees a trend in the above Google Trends graph. It would have been nice to have my clients understand this before the mission crept into a non-productive part of the market. If they keep on their current course they can expect slow sales for the next 20 months. I suggest we use our SEO tools and correct the path. And use more SEO Tools!

And always use E2-ts.com to help with your SEO decisions.